Close, But No Cigar! 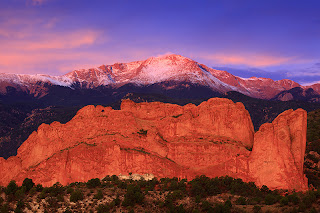 This morning I peeked outside before sunrise and noticed some lingering fog in the area, so I grabbed my camera gear and headed to Garden of the Gods. I almost T-boned an S.U.V. on the way there when the driver apparently was still asleep and ran a red light. But that's not the close call I'm writing about.
I got to the Mesa overlook an hour or so before sunrise and there was a perfect band of fog stretching along the Front Range between the rock formations in the Garden and Pikes Peak. If it would've stayed in that position, I would've had an epic morning of photography. But no, it didn't. A breeze from the north pushed it south of the Garden, and by the time there was enough light to shoot, only the trailing edge was still within view of any compositions that included the park. Oh well, it was still a spectacular morning. This week's massive storm event (five inches of rain in Colorado Springs in 24 hours? Wow!) left a dusting of powdered sugar on Pikes Peak's tundra, and it has so far hung on. With the first day of autumn next week, maybe the snow is here to stay til next spring. We shall see! [click photos to enlarge]
Posted by Todd Caudle at 2:17 PM