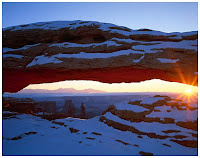 I love natural arches. Whether they're residents of Arches National Park in Utah or right here in Colorado's Western Slope canyon country, they're just plain fascinating. Yet, despite the incredible length of time it took wind, rain and ice to carve out these natural frames from the landscape, those same forces will eventually weaken these structures and send them tumbling down. Landscape Arch in Arches National Park, the world's longest span, has been in danger of collapsing for the last few years, so the National Park Service has cordoned it off at what is perceived to be a safe distance.

Unfortunately, an arch in Nevada's Valley of Fire State Park collapsed recently, as this story in the L.A. Times details: LINK

It's a bummer, but these things happen. According to the story, it appears natural forces led to its collapse, and not some "hey, watch this!" moron climbing on it.

Addendum: The accompanying photo (click to enlarge) is of Mesa Arch in Canyonlands National Park, Utah. I showed up at the trailhead for the short hike after an overnight snowstorm, and was disappointed to see one other car in the parking lot. I didn't mind the prospect of sharing the morning with another photographer, but I was worried that the fresh snow would show footprints of some careless wanderer. I didn't want footprints in my photos! Lit by my headlamp, I followed the footprints all the way to the arch, and was pleasantly surprised that they continued right past it. Phew! That was a close one! Mesa Arch barely juts out from the canyon wall from which it was carved, and my guess is the person never even knew they passed it. I never saw another soul that morning, and the barely discernible critter prints below the arch didn't bother me at all.
Posted by Todd Caudle at 10:09 PM 1 comment:

Last night I watched the debut airing of Journey's Manila concert on Palladia. I can confidently say that former lead singer Steve Perry's legacy is safe.

As the story goes, guitarist Neal Schon caught a Youtube video of Filipino singer Arnel Pineda belting out Journey tunes. Schon was impressed enough with Pineda's representation of Perry's voice to offer him the job of lead singer for the legendary band. Good for Pineda, not so good for longtime Journey fans.

Pineda sounds like little more than a cheap Steve Perry knock-off, to the point where I wondered if he had a "Made in the Phlippines" label affixed to his backside. Missing was Perry's more nuanced, emotive voice. Granted, it's no small task to replace someone like Perry, whose voice guided the band's zillions-selling, multi-multi-platinum success for two decades. And I recognize the need for the remaining members of Journey to find someone similar enough to Perry's singing style that touring on the weight of the band's legacy is even possible. But I was disappointed with the one-note mimicry of Pineda.

What's most strange is that Journey's current line-up has a ready replacement for Perry in the most unlikely place—he's sitting behind that massive drum kit. Deen Castronovo, who joins legendary stickmen Aynsley Dunbar (1974-1978) and Steve Smith ('78-'85, '95-'98) as the only drummers of consequence in Journey's history, sang lead on several songs during the program, and I was taken aback by how similar he sounds to Perry. He successfully delivered the throaty quality of Perry's voice on "Still They Ride" and other weighty classics, and did it while confidently hammering out solid beats. Castronovo, a big, burly man with arms the size of small tree trunks, was the last person I expected to hear such sweet harmonies from. It was a very pleasant surprise.
Posted by Todd Caudle at 8:09 AM 1 comment:

There's a lot about this past winter and our current spring that reminds me of Colorado back in the '70s. For instance, the wind. The freakin' wind. Enough already! While it's a major annoyance down here in civilization, check out what it's doing in the mountains. Dust from the southwest deserts has decided to vacation in Colorado's high country, and the result is, well, fugly! I certainly don't expect what remains of the snowpack in May to look clean and pure as the wind-driven...well, you know. But all this red dirt is just weird! It must certainly be speeding up the snowmelt, which doesn't seem like it would be a good thing.

I guess by July it'll be history and the wildflowers will take over, but until then, this is what we've got.
Posted by Todd Caudle at 10:28 PM 1 comment:

The War on Photographers

Speaking of shooting pictures of Pikes Peak this morning, I came across something very disturbing. Apparently, unbeknownst to me prior to seeing the sign in this photo (click to enlarge), I was breaking some kind of law while taking pictures up on Rampart Range Road. This is unacceptable! What ever happened to freedom of expression? Am I going to have to be on the lookout for Johnny Law when I'm out shooting? This is the U.S. of A., for cryin' out loud! I think I'll start a petition.
Posted by Todd Caudle at 10:20 PM No comments:

Starting a blog is something I've been toying with for many months. There are so many times that I've been tooling down the road with a million voices -- er, I mean, thoughts, THOUGHTS -- in my head, thinking to myself, "I should start a blog!" I actually tried to name my blog the ISHOULDSTARTABLOG blog, but somebody beat me to it. Sooo, since much of what I do revolves around my love for, and exploration of, Colorado, I settled on the oh-so-obvious "Todd Caudle's Colorado." I know, deep.

Since this is, at its heart, a photo blog, why don't we kick things off with a photo! Accompanying this post is a photo I took just after sunrise this morning. Look closely and you'll see the Summit House and the massive viewing platform on the summit of Pikes Peak, highlighted by the setting moon. (click on image for larger version)