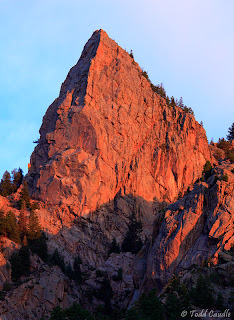 Once upon a time, when I was living in Pueblo, passing through the Wet Mountains on my way to just about anywhere was routine. But there was never anything routine about this big, beautiful pinnacle rising from a ridge where Highway-96 passes through Hardscrabble Canyon. It's a geologic feature that stays hidden from view until one rounds a corner and - WHAMMO! - it's impossible to miss. I loved having this unnamed hunk of rock in my life so much that it became an occasional destination rather than just something to see along the way to somewhere else. I have winter photos with snow clinging to every nook and weighing on every tree branch. I have photos of fog swirling around and amongst the tower and its smaller neighbors. I have photos of the moon setting behind the ridge. If it's an interesting photo of this pinnacle, I just might have it.

In 2010 I moved back to my true home, Colorado Springs, and thus eliminated most reasons to pass this way again.

That changed this week when I headed out for a few days photographing in the Sangre de Cristo Range – another destination that fell off my radar after having been one of my go-to places during my Pueblo days. On the drive to Westcliffe, I drove through the canyon and gazed longingly at this magnificent pinnacle. It was like seeing an old friend. Time was short on the way by, as I needed to keep going if I was to make Hermit Pass before sunset. Still, I kept a keen eye out for any sign of the resident herd of bighorn sheep, figuring that they'd be reason enough to stop and snap a few pics. No luck, so I kept on going.

For the return trip I decided I'd car camp below my old friend and see if there was any interesting light in the morning. I was rewarded with just a few minutes of rich, pinkish-red alpenglow light before the clouds to the east swallowed up the color for good. Those few minutes were enough to rekindle my love for this striking pinnacle.
Posted by Todd Caudle at 7:41 PM No comments: