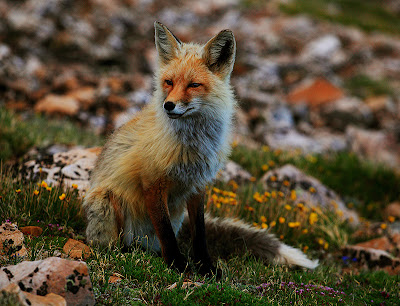 I'm currently in the midst of a photo trip over the Fourth of July holiday, and yesterday I was rewarded with what can only be described as a gift from nature. I left my truck at 11am, with the intention of climbing North Star Mountain near Breckenridge. If conditions warranted, my plan was to stay til sunset and hike out in the dark.
North Star Mountain sits at the junction of the Tenmile Range to the north and the Mosquito Range to the south. From atop the peak the view takes in close-up views of a few of Colorado's fourteeners — Quandary Peak to the north and Mounts Lincoln, Bross and Democrat to the south. Not that the fourteeners are the only attraction. The headwall to the west of Quandary is an array of craggy peaks, and after the epic snow season that just ended, the basins below North Star are still choked with snow.
Being in less than tiptop shape, I took my time getting up the peak. The weather was nothing short of perfect, with puffy white clouds drifting overhead, and nary a hint of dangerous lightning storms to prevent my plan to stay on the summit ridge all day. I stopped just a hundred feet shy of the summit, due to some dangerous-looking snow cornices between me and the final pitch, but it didn't matter. The view in every direction was astounding! With many hours to go til sunset, I bided my time taking it all in, trying to stay out of the occasional stiff wind by hiding out amongst the rocks.
Well, sometimes the best laid plans can go awry. All those docile clouds that had delighted me all day began to fizzle, and one lone, dark mass of clouds to the west began to form. It wasn't bad weather I was concerned with, as it didn't really look like the type of cloud to produce lightning. I was more concerned with the possibility of hiking all that way, staying up there all those hours, and then being shut out for sunset color. I watched this cloud build for an hour, and sure enough, when the sun dipped low to the horizon, it sank into the gray morass. So much for that!
I figured the sun might peak up underneath the clouds after sunset and give me a show, but I had had enough. I began the trek back to the truck a bit before official sunset time, figuring a little extra light might be nice. I followed a sketchy trail through the rocks down North Star's east ridge as the light faded fast.
And then I got a surprise. A fox darted across the trail in front of me. To be honest, it scared the crap out of me! It seemed habituated to humans enough that I was able to sit down, change lenses, and spend almost half an hour taking pictures of it. The lighting conditions were far from ideal, so I had to bump the ISO on my camera up fairly high to capture pictures in the low light, but after being thwarted in my sunset attempts back up the ridge, finding this willing subject at 13,000 feet after thinking my day was a bust saved the day.
Posted by Todd Caudle at 10:51 AM

Awesome! We were treated to an colorful sunset, but only due to remnants of the Duckett fire to the west.