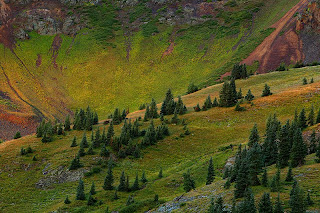 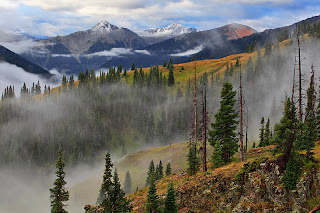 After my nearly fruitless 500-mile trip to Monument Valley on Sunday, I decided against hanging around for another day to try to get my Mitten shadow shot on Monday, and headed back to Colorado Sunday night for a shot at an interesting sunrise Monday morning. I pulled into the upper trailhead parking area on Lizard Head Pass a little before midnight, dropped Tears for Fears' excellent "Seeds of Love" CD in, cranked the stereo and drifted off to sleep. As usually happens, I woke up several times to enjoy different parts of the disc as it cycled through several playings, finally turning off the music at around 5am. At 5:30 my alarm jolted me awake. No biggie, I figured I could grab a nap along the road on the long drive home.
It rained steadily all night long, finally letting up sometime in that uninterrupted 30-minute window of sleep I enjoyed. As is usually the case with overnight rain, I was pretty sure I'd awake to find some fog drifting through the valleys. The problem was deciding where to go. In the San Juan Mountains around Telluride, there are lots of options. I headed down the road towards Ophir, but the fog wasn't as prominent below the San Miguel Mountains as I'd hoped. I made a spur-of-the-moment decision to head over Ophir Pass, a rocky four-wheel-drive road that drops out on Highway 550 near Silverton on the other side. As I got to the top of the pass, sunrise was at hand. As I headed over to the east side, the sun found a hole in the clouds and lit the tundra with incredibly rich tones. [photo #1 - click to enlarge] In early September the tundra up above treeline is well on its way to fall colors, and the warm light only added to the colorful palette. I also got my first glimpse of peaks around the pass, and what had been rain at lower elevations had been snow up higher — another sign of fall in the Colorado high country.
I noticed that the low clouds and fog I was after was farther down the valley towards Silverton, so I continued on. Once I got to the highway, I hung a left and headed towards Red Mountain Pass, where the clouds had taken up residence. Once on the pass I was still in the gray soup, so I took a left on the rough Black Bear Pass road, which climbs steeply from Red Mountain Pass, and was soon successfully above the clouds. The scene was even better than I'd hoped for, with Bear Mountain and Grand Turk to the south capped with fresh snow and clouds drifting in and out of valleys both near and far. [photo #2 - click to enlarge] Figuring that no one would be coming up or down the narrow road at this early hour, I parked on an uphill grade with a great view and set up my tripod. I could've shot from that spot for a long time, but thought maybe I should get up a little higher, to see what the expanded view would offer. I turned the ignition key in my truck and nothing happened. Oh crap! My mind immediately started envisioning backing down the narrow road with no power steering or power brakes. My heart raced. I turned the key several more times, and finally the engine fired, resetting my clock and spitting out my CD at the same time. Hmm, maybe I need to rethink those all-night CD rock shows I have a habit of enjoying!
With the possibility of getting stranded by a dead battery, I scrapped my plans to head home via four-wheel-drive Cinnamon Pass and Lake City to check on the status of fall colors along Highway-149 and made a commitment to stick to paved roads all the way home, making sure to leave the engine running. So much for catching a nap on the way home! But I was thankful that, after not getting the shot I had envisioned in Monument Valley the night before, I got something photographically worthwhile out of the trip.
Posted by Todd Caudle at 10:08 AM

Nice consolation prize, man. And not a bad fools errand running down to Monument Valley like that. I was glad to hear the cliff-hanger dead battery saga had a happy ending!

Thank you, Todd.
My niece, Carolyn, has been inspired by your photos as surely many others.
Carolyn is legally blind (and deaf) so finding inspiration for her is truly a fine gift. Thank you!

"Tried to draw this scene from a photo from my old 2003 calendar featuring some beautiful photographs by Todd Caudle. This is the West Spanish Peak in Colorado on a cloudy day with some trees in the front. I found this to be quite a challenge to draw the trees right in front of a cloud-covered peak like this. -CLM :)"