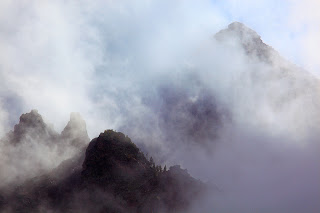 A week ago an experienced climber fell to his death near Pyramid Peak, on a sub-peak called Thunder Pyramid. My thoughts go out to his family and friends who are mourning the loss. (I'll refrain from naming him, since I didn't know him, and only read of the incident in the Aspen Times a few days ago.)
In our book 14,000 Feet – A Celebration of Colorado's Highest Mountains, Walt Borneman came up with the perfect title for the chapter on the Elk Mountains, of which Pyramid Peak is part – Red, Rugged & Rotten. The rock that makes up these imposing mountains – including the familiar and beautiful Maroon Bells, just across the valley from the Pyramid Peak massif – is the kind that you can pick up in your hands and twist the sedimentary layers apart. Many people have died climbing these peaks, and as last weekend's incident shows, you don't have to be an inexperienced hiker in over your head to lose your life up there.
Then again, it doesn't take a red, rugged or rotten mountain to cause the death of a climber. Even the easiest fourteeners can turn on you when the weather moves in quick and/or unexpectedly. It's often said by those who climb Colorado's mountains that it's best to turn back if things get dicey, with the sound knowledge that the summit will be there next time. Still, when you've hiked since sunrise to get to the top of a mountain so you can check it off your list (not my reason for exploring Colorado's high country!), having the summit within sight can be too tempting. But that lure can be fatal. Mother Nature couldn't care less how many peaks you've got to go on your list.
This is a photo of clouds breaking around a sub-peak of Pyramid Peak, taken Thursday afternoon as a rough-and-tumble storm system began to ease its grip on Colorado. [click to enlarge]
Posted by Todd Caudle at 2:01 PM